Over ten thousand votes were cast for Retail NI’s High Street Heroes awards, with old favourites and new faces picking up gold, silver, and bronze across a range of categories. The initiative shone a light on Northern Ireland’s independent retailers, with the public choosing their favourite retailers in an online vote.

In an exclusive reception at Hinch Distillery, retailers across the region were celebrated with Chill Off-Licence in Derry/Londonderry, Harkins Pharmacy in Maghera and Murrays Nearby in Cullyhanna all picking up gold. Northern Ireland Office Minister Lord Caine addressed the event.

High Street Heroes NI was a joint initiative from Retail NI and Belfast Live supported by Camelot and Voice for Locals.

“I congratulate Coleraine and Newtownards on winning the prestigious High Street of the Year Award, which highlights how highly valued retailers in these areas are to their local communities.

“The UK Government is committed to making NI a better place to live, work, invest, and do business, and we will continue to support the growth of Northern Ireland’s high streets by building a stronger economy and through major investment such as the Levelling Up Fund and the upcoming UK Shared Prosperity Fund.” 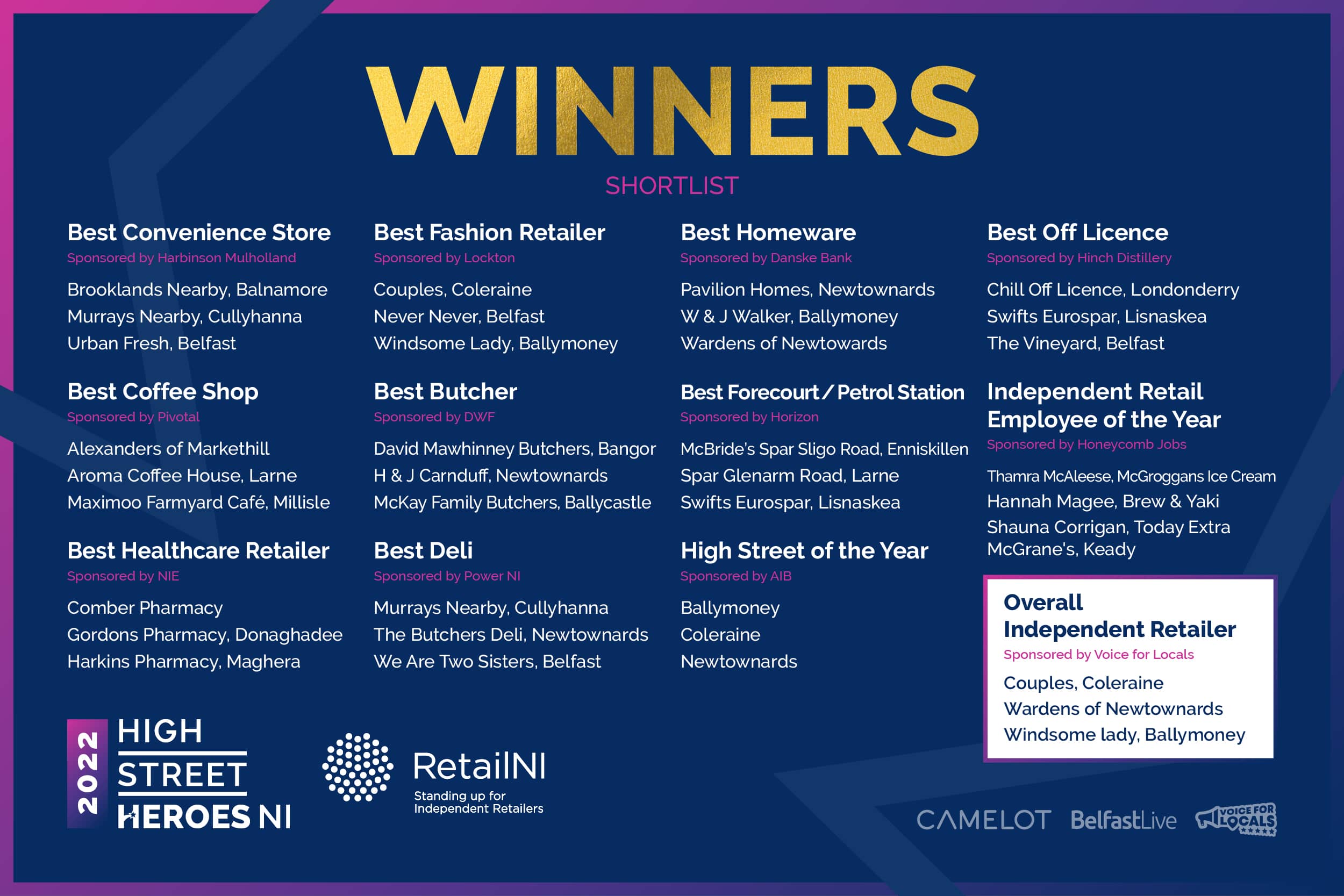 “The High Street Heroes Awards is a wonderful celebration of Northern Ireland’s independent retailers. The winners are based across Northern Ireland showing a brilliant regional response to the campaign and emphasising the community support for retailers.

“It has been a very difficult year for independent retailers, but this campaign has shone a light on how valued they are in their community, and the vital role they play in keeping the local economy alive. As they work to remain viable in this difficult business climate, it is only right that we celebrate and champion the sector.

“It is really good to see many independent retailers from some of our smaller rural towns getting the recognition they deserve at our High Street Hero Awards.”

“Our local high streets are the backbone of our society, often the places we go for all our essential items, but also where we find that sense of community in our local towns, cities and villages.

“This year’s winners are reflective of the fantastic high streets and retailers across Northern Ireland who strive to support and drive forward the local economy. Congratulations to all the winners.”

“As the operator of the National Lottery Fund, we know the importance of local, independent retailers and the value they provide both customers and the economy. We are thrilled that we have been able once again to support this initiative and continue to promote the hard work and value of those who make our local high streets.

"We all have our personal favourite local independent retailers close to where we live. It has never been more important to voice for locals and really show how important they are to communities across Northern Ireland. It is those retailers who encourage people into cities, towns and villages to enjoy the unique local choices, quality and personal touch on offer.”

"It is brilliant to see local consumers voting for their favourite independent retailers and being proud of the fantastic contribution they make to the high streets."